The US National Rifle Association (NRA) has taken down its Facebook page, initially leaving just an image in its place and has not updated its Twitter account since the recent tragedy in Newtown, Connecticut which left 27 people dead, 20 of them children. 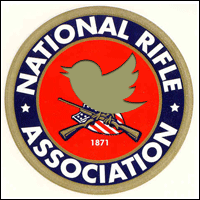 The NRA Facebook page has 1.7 million likes on the page and 63,030 followers on Twitter (@NRA), which it usually updates 3 or 4 times a day. Following the shooting, the Facebook page was
inundated with debate over gun control in the United States and shut shop on Saturday.

The shootings, which took place at the Sandy Hook Elementary School, have led to the NLA’s Twitter account being bombarded with tweets concerning the shooting, some abusive, some supportive and other just to share their condolences. Of course, some sensitive users tweeted their account in a bid to express their ongoing support for “the right to bear arms”

The image that is shown above has now disappeared altogether from the social media site and the only reference that can be found to the organisation is now just a wiki page and app.

Unsurprisingly, the NRA has remained silent on the shootings, which were carried out by 20-year-old Adam Lanza.

In a speech given in the wake of the murders, President Barack Obama struggled to speak at times, as he told the nation that something has to be done to stop these kinds of tragedies happening again. In an obviously difficult address to the nation, the President was seen to be wiping tears from his eyes and had to stop to collect himself several times.

Whilst the NRA are a powerful organisation in the states, the shooting of so many children has once more sent shockwaves around the world and it would seem that the NRA are not in the mood for debate at this time. The shooter was carrying several weapons, including an AR-15 rifle, which was also used in the Aurora movie shootings; guns such as these are capable of firing 100s of rounds very quickly.

Social media has also come in for criticism as misinformation spread rapidly around the world whilst details were still unknown. Police local to Newtown criticised the use of social media to spread gossip as more news emerged; it was initially thought that Lanza’s older brother Ryan had carried out the killings.

According to Web Pro News, Connecticut State Policeman Lt Paul Vance said that ghouls had been posting as Adam Lanza on several social sites after the shooting came to light.

“One thing that is becoming somewhat of a concern is misinformation that is being posted on social media sites,” he said.

It’s thought that those who made and continue to make posts pretending to be the shooter will face prosecution when caught.

However, trolls such as these are really nothing more than pathetic people with nothing better to do and one would imagine that the investigations, will be somewhat less of a priority to the main investigation into the tragedy.

Here at My Social Agency, we would like to express our condolences to those affected by the horrific events which unfolded on Friday.