Well folks, here we are again, once more discussing a major change to Facebook news feed; prepare for the avalanche of complaints to begin! 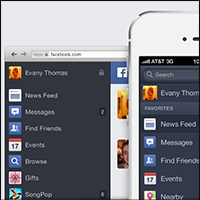 Yes Facebook has announced a major update to its news feed, so that the social media site now is more image-centric and looks the same across all platforms. This has been rumoured for some months now and as expected, it’s geared towards mobile.

Of course, the update does include the fact that now, we can be bombarded with more advertising, once Facebook has learnt more about its user base by allowing it to consume the content it wants.

To this end, the makeover is designed to give as much space to images and videos than ever before. Additionally, news feeds can now be personalised so that Facebook users can have their very own “personalised newspaper”.

The new layout is a lot cleaner than anything we’ve seen before and focuses on stories and Pages that users interact the most. Everything even remotely image-based, including news articles, photos and events is designed to stand out more on the feed in order to catch the eye. The new layout is due to begin rolling out on Thursday and those interested in getting it first can sign up for the waiting list on Facebook’s Newsfeed page. Whilst the new feed has had an overhaul, it’s just the aesthetics, not the underlying way it delivers information in the first instance.

The idea of having such strong visuals is all about engagement. Most of us know that images are the most engaged with on the social media site, so the news feed is designed to ensure that Pages (and people) can share visually attractive imagery in order to encourage promotion. As you can see from the example picture, this allows for much larger and clearer imagery where the ‘call to action’ is also clear. Like and comment buttons stand out more and the option to hide is also clearer than it was before, making it easy for users to hide annoying posts such as Pages that over post.

Another new addition is the “Following” feed to the right hand side of the news feed. This is intended to allow people to connect more with the Pages and people they like by following their content.

For Page owners, the cover photo will now appear in the users feed, for “organic and paid Page Like” stories which is intended to give more context to the Page. Bearing that in mind, if you own a business page, now is the time to get that Facebook cover designer to make a stunning visual for you.

Whilst all of the new features won’t become clear until the new feed begins rolling out, the initial pictures and presentation from Mark Zuckerberg are all encouraging. Of course, it may also mean that we’ll experience the usual glitches whilst the new features are being rolled out, but as usual, we’ll live with it, despite moaning and threatening to move to Google+.

The new feed was announced on Thursday by Mark Zuckerberg himself at Facebook Headquarters in Menlo Park, California, where he made the comment that he wants the site to become a “personalised (sic) newspaper”.

He went on to say that the design would be image-heavy and that it’s “designed for the way we’re all sharing today and the trends going forward.”

This is an important step for Facebook as it has experienced quite a few problems with mobile apps in the past, prompting a slew of complaints from users. However, recently the company brought in Big Nerd Ranch to address problems with Android.

“It’s eight hours a day, five days a week. If you have a guest come, they’re sent away. Zuck can leave a message. This is what you do. People come out with their heads a little melty but they can write production code that Monday,” Mike Shaver, Facebook’s Director of Mobile Engineer said.

It looks like this has had a positive effect and that Facebook may have finally got to grips with the mobile question. Indeed, the company have this year seen mobile revenues jump from 0 to 23% over the course of around 8 months.

My Social Agency is a digital marketing agency based in the UK with offices in Leeds and London. Get in touch to learn more about social media marketing.