US retail chain Walmart has shown that it’s not afraid to use cutting edge mobile technology in its advertising campaigns, with a new augmented reality app that lets customers play a Spider-Man-themed game while shopping in stores. 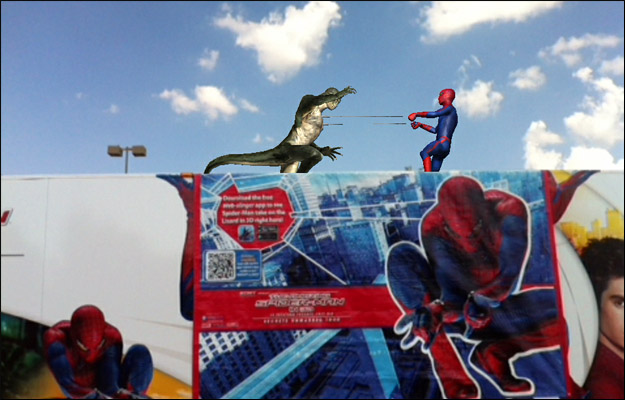 The app, which was developed in partnership with Sony Pictures and Marvel Entertainment, is being released to coincide with the Amazing Spider-Man reboot movie, At the moment users can  view toy demos and play a Spider-Man game on the app. Users can also point their smartphones at a number of promotional Amazing Spider-Man trucks, touring various cities, in order to view an animated battle between Spider-Man and The Lizard.

Later in the month more features will be added to the app. From June 15th customers will be able to point their phones at Spider-Man comic books on display in Walmart stores. This will then trigger super-hero fight sequences, where a life-sized Spider-Man walks into the store. Users can take their picture with the CG Spider-Man and then post the pics onto Facebook.

Then on June 26 the app will receive another update that enables a scavenger hunt-style game. Players have to help Spider-Man fix his broken webslingers by visiting certain displays within Walmart, such as Kellogg’s Cheez-It and Pop-Tarts displays. Completing the game will unlock extra content for the app.

“We think as the use of mobile technology continues to grow with consumers that it is a great way to engage them,” said Walmart’s Brent Duwe. “This is a massive program that we’ve put together to provide added value to consumers and to provide additional access. The augmented reality app really ties the whole thing together.”

Walmart, which rolled-out a similar promotion for The Avengers Movie, is showing that really understands the massive potential of promotional mobile apps. While augmented reality is still in its infancy, it’s growing fast.  Analysts ABI Research forecast that the market of AR apps in the US alone is expected to reach $350 million in 2014.

Early experiments have shown real results with AR campaigns. Car manufacturer Kia’s AR mobile app, which was tied to the Australian Open, reportedly increased sales by 57%. Meanwhle Volvo’s AR app, which was released last spring, saw a traffic increase of 293% to Volvo’s official site.  It’s not hard to see why. AR is all about engagement and is a far more potent way to get customers interacting with your brand than regular mobile ads or even rich media ads.

My Social Agency is a digital marketing agency based in the UK with teams in Leeds & London. Get in touch today to learn more about our app development services.