LinkedIn is offering the opportunity for its members to become ‘thought leaders’ on the professional networking site, which could mean that what they post reaches a significant chunk of the 175m+ business people who use the site. 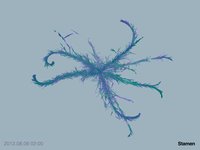 The chance to become a thought leader is currently limited to just 150 places, although this is expected to expand over the course of the next few months. Leaders who are chosen for the scheme will be expected to write and share exceptional content on the site, including infographics, “thought-provoking” presentations, articles, polls, SlideShares, videos and any other content that is interesting and relevant to any particular industry that they consider themselves an expert in.

To apply to become an influencer, users must provide four areas in which they consider themselves influential, examples of written content that has already been published, sample topics on what they would like to write about and two content examples from the day of application that they consider worth sharing.

People from business, non-profit organisations or the public sector are all eligible to apply and it’s an ideal opportunity for interested parties to reach a huge audience.

Discussions around the growing trend of policing social media comments are to take place in order to produce new guidelines on how to tackle the problem. Keir Starmer QC, the Director of public prosecutions in the UK, said this is necessary in order to avoid a “chilling effect” on freedom of speech in Britain.

It’s thought that representatives from social networks such as Facebook and Twitter will attend, along with academics and lawyers. The discussions are to be hosted by the Crown Prosecution Service.

The news comes following a rise in complaints to police over insulting or offensive comments on social networks, reaching around 50 per week across the country. A man was jailed on Monday for 22 months after posting comments on Facebook about the missing 5-year-old, April Jones.

Another man was given 120 hours community service for posting comments about dead British soldiers which were deemed to be offensive.

It’s thought that the new guidelines will be announced in the run-up to Christmas this year.

Whilst of course people do say some despicable things on social networking sites, facing prosecution for an offhand and ill-thought-out comment is something that will keep many people quiet.
However, lots of young people use social media and having a criminal record for a posted comment seems over the top for a society such as ours.

Another idea is to make social networks themselves better moderate comments and remove offensive posts quickly when they are put up. However, whilst this might be doable for huge sites such as Facebook, for smaller networks it would present a huge problem.

Let’s face it, people have been offensive to each other for as long as they have been around. Social networks may highlight the problem, but there’s no doubt that ignorance and bigotry still exist in the UK. The question is, is it really such a terrible offence that it could send someone to prison and destroy that person’s future?

Of course, the situation is and will continue to be the subject of debate for some time to come.

Jim Killock of the Open Rights Group told MySocialAgency that: “we think section 127 needs review: imprisonment for vile comments is not appropriate. Telling of [sic] offensive jokes should not be landing people in gaol. The line between speech and illegality needs to be drawn at incitement to commit serious offences.”

The Guardian has reported that Facebook is taking UK taxpayers “for a ride” following a blog by Tax Research UK, who said that the social media site paid just £195,890 in 2011.

However, it’s thought that this is due to the company putting sales through company headquarters in the Republic of Ireland, which pays the UK branch a “commission” on sales made in this country.

The social media site also charged Facebook Ireland for paying its UK staff share options; corporation tax is lower in the Irish Republic than it is in Britain.

Richard Murphy, of Tax Research UK and a chartered accountant, said: “The UK is being taken for a ride. Facebook is taking standard practice for these IT companies to a new high, or low, depending on how you look at it. The UK is giving the tax break and the Irish get benefit of all the tax on the sales.”

He went on to say that around 11% of sales made in the UK are actually declared to the tax man due to the sister company taking commission in Ireland.

“We have our international headquarters in Ireland that employs hundreds and a series of smaller local offices providing support services all over Europe. Dublin was selected as the best location to hire staff with the right skills to run a multilingual hi-tech operation serving the whole of Europe,” a spokesperson for Facebook said.

More mobiles than people in the world

The International Telecommunications union has released a report which says that there are now more mobile phones in use across the world than there are people. It seems that by the end of last year there were 6bn subscribers and there are nearly 7bn people on Earth.

This means that, by now, the figures should just about match up.

“We count Sim cards, not the number of devices or people, so if one person has two Sim cards in one device, it counts as two subscriptions; and we count monthly subscriptions as well,” said Susan Teltscher, head of the agency’s data division.

The report looked at 155 countries in order to assess their access to, and use of, ICT. We thought we’d bring you something a little different this week with a visualisation of how photos shared on Facebook go viral. The video is based on three photos shared by Star Trek legend George Takei, following their growth in popularity around the globe.

Stamen Design of San Francisco made 3 videos to illustrate the phenomena and said: “We’ve tried to capture the frenetic energy surrounding three of the most shared images,” the team said.

“Each visualization is made up of a series of branches starting from a single person. As the branch grows, re-shares split off on their own arcs, sometimes spawning a new generation of re-shares, sometimes exploding in a short-lived burst of activity. The two different colours [sic] show gender, and each successive generation becomes more and more white as time goes by.”

Need help with your digital campaign? Hire us for year 3000 digital marketing strategy