We’ve all heard the speculation and now it seems to be coming to fruition; Facebook will introduce video ads by the summer, according to ‘sources’ talking to The Telegraph. 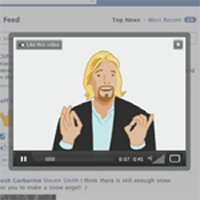 It’s thought that the ads, which will appear in user newsfeeds, will last for 15 seconds and play automatically, but won’t include sound in the first instance. However, when a user activates sound, the ad will restart.

Initially, users will only see ads from one advertiser per day and it’s thought that video advertising will be introduced slowly so as not to put people off using Facebook. Whatever the case, it’s bound to come in for user criticism just like every other single update Facebook make to the site does.

According to the report, the Financial Times say that the move is a bid to further monetise the site, following its poor performance on the stock market last year. The FT also said that prices are expected to be in the “low $20s” per 1000 views, making it cheaper than television advertising.

Video advertising is growing rapidly in popularity amongst brands and it’s thought that big brand names such as Coca Cola will be the first to advertise.

YouTube has launched a pilot scheme to offer paid channels on its site for a select number of content providers to offer subscriptions from around 64p per month.

The video site says that it has been working on the plan for some time and initially, 53 providers will offer subscriptions with a free 14-day trial and discounted rates for certain providers.

The channels on offer are a good mix, from Sesame Street offering full episodes at launch, to a Harley Davidson channel ‘Fix My Hog Premium’ also expected. UK TV series will also be available through the channel Acorn.

Users can pay using a credit card or Google Wallet.

“This is just the beginning”, YouTube said on its blog.

“We’ll be rolling paid channels out more broadly in the coming weeks as a self-service feature for qualifying partners.

“And as new channels appear, we’ll be making sure you can discover them.”

It’s thought that around a billion people worldwide use YouTube, which already offers a wide variety of video from homemade pranks to commercial advertising clips, news and entertainment.

Currently, there are more than 1 million channels that earn revenue through the site’s partner program and these have been piling on the pressure for YouTube to offer other ways to monetise content.

Paid content will be available across all devices and a full list of the subscription channels can be found here.

Mobiles will outnumber people by 2014

A recent report from UN agency the International Telecoms Union, mobile subscriptions will outnumber the amount of people on the planet by the end of next year.

It’s thought by that time that there will be more than seven billion mobile subscriptions; currently, there are around 6.8bn. The number of people online is also on the rise, with more than a third of the world’s population now connected.

The former Soviet Union has the highest subscription rates, with 1.7 people mobile, but Africa has the lowest, with just 63 people out of every 100 mobile subscribers.

Europe has the highest online penetration rates, with 75% of the population connected, followed by the Americas with 61%.

“Every day we are moving closer to having almost as many mobile cellular subscriptions as people on earth,” said Brahima Sanou, director of the ITU Telecommunication Development Bureau.

ITU secretary-general Hamadoun Toure said that whilst the progress was “extraordinary”, more needed to be done to help get the rest of the world online.

“Two-thirds of the world’s population, some 4.5 billion people, is still offline,” he said.

The two Spocks go head to head in this ad for Audi, making for an amusing set up where they see who can get to the golf course first.

Of course, the new Star Trek movie has just hit UK cinemas, so it’s really a two-pronged ad which highlights Zachary Quinto’s role as Spock, one that he does exceptionally well it has to be said.

Having seen the movie, I can confirm it’s a great film for fans and non-Trekies alike; great plot, great effects – loved it.