Simplicity is the greatest luxury

“Simple can be harder than complex: You have to work hard to get your thinking clean to make it simple.” Steve Jobs, Apple 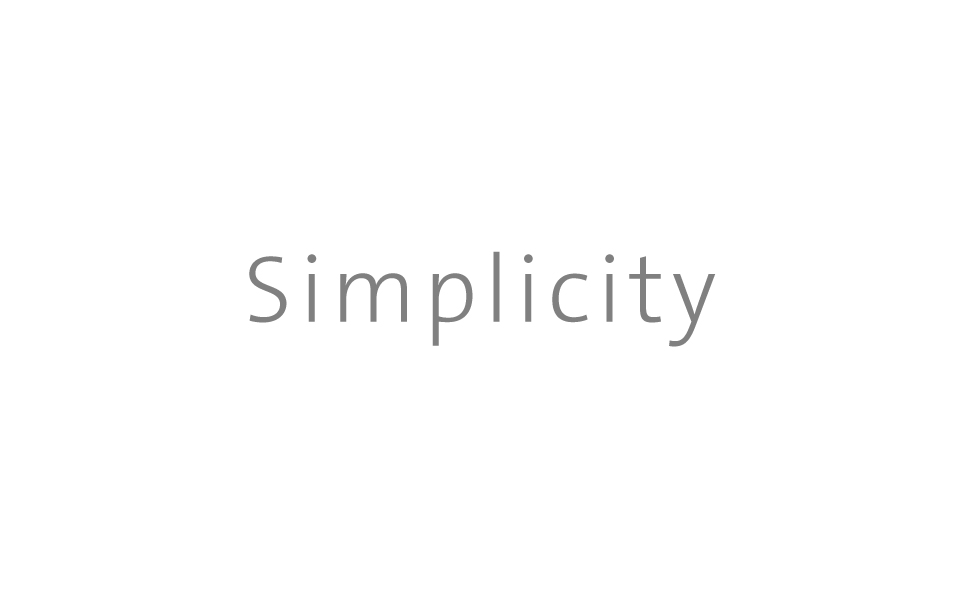 My Social Agency recently completed a User Experience (UX) report for one of its clients and the results gave some fascinating insights. The overwhelming result of the data we collected – using a combination of analytics, screen recordings of users, and heat maps showing the positions of users’ clicks, taps and scrolls – was that users do not use the array of additional features that have been added to the site, over the years, in a kind of arms race with their competitors. The additional features the client felt so important to have, actually provided no benefit to users.

Too often, as designers and developers, we are scared to make decisions, and instead try to offer multiple options, dressing it up as ‘choice’. Instead of honing the design experience to one way of ordering content, we clutter the screen with an array of buttons.

We abdicate responsibility and either let clients choose, or clutter the screen interface with superfluous layout options for the user. In reality, users almost never deviate from the default option given. When was the last time you configured the way your Gmail inbox is displayed, for instance, or changed your Amazon wish list settings?

We also found that many sections of the site, that were deemed to be essential, get almost no traffic. Defining, then removing, the unnecessary is one of the most difficult aspects of design. Often the biggest hurdle to overcome is that what is ‘necessary’ is often defined by the client rather than the user, and that removing the element is impossible due to the internal politics of the client organisation.

Conway’s law is a well known adage that states that  “organisations which design systems … are constrained to produce designs which are copies of the communication structures of these organisations”.  Usability expert Nigel Bevan reframed this in terms of web design as:

“Organisations often produce web sites with a content and structure which mirrors the internal concerns of the organisation rather than the needs of the users of the site.”

A user-centred design approach with simplicity at its heart might structure a site in a very different way. This is why it is important that the client representative is a ‘champion’ with enough authority to make tough choices, and the designer supports them with clear reasoning and solid data.

A feature which is determined to be essential to the client but in actuality is untouched by users, either diminishes the user experience, or just adds visual clutter. Either way, there is a cost of having the feature on the screen. With careful split testing, it is possible to determine what this cost might be in terms or conversion goals, or by other metrics such as bounce rate, time on page etc.

An alternative approach to home page design, for example, might be to start with a blank screen and only adding features which are known to be useful. Famously, Steve Jobs remarked that at Apple a relentless approach to simplicity meant saying 1000 ‘no’s for every ‘yes’.

“People think focus means saying yes to the thing you’ve got to focus on. But that’s not what it means at all. It means saying no to the hundred other good ideas that there are. You have to pick carefully. I’m actually as proud of the things we haven’t done as the things I have done. Innovation is saying no to 1,000 things.”

Design simplicity is not the same as hiding complexity. Making simple does not mean sweeping all the stuff that clutters under the carpet, such as putting a load of unpopular links under an ‘additional services’ menu header. It is about removing the clutter – the visual junk – in the first place, in favour of a clearer way of doing things.

A good way of achieving this is using what I recall ‘progressive reveal’. This approach guides users and unveils more options at the relevant time and place, rather than all at once in an overwhelming rush of options and possibilities.

As an exercise, consider removing the navigation top bar or ‘hamburger’ menu on a web site home page. How then would you guide users to the content on the rest of the site? The result might be a much more context-rich set of links within the main body of the page. Top bar navigation is such an established design pattern that it is often implemented thoughtlessly, and generally performs much poorer than expected in terms of user clicks. Almost inevitably there will be one link that gets far more clicks than any other, so why are they all given equal weight?

Simplicity is not the same as minimalism, though there might appear to be some similarities. Design simplicity is not just a case of ‘less is more’, rather ‘just the right amount’. Minimalism as an aesthetic style can go overboard in stripping back appearances, to the point where it may hinder usability. It may also require additional complexity behind the scenes to give the appearance of seamless beauty. Everything is servile to the visual appearance.

Imagine a pristine minimal white kitchen where none of the doors and drawers have handles, and instead have sophisticated push button catches. As a consequence users have no idea how to open any of the cupboards, and the result is lots of grubby hand prints on the white units.

Such a design is minimalist but not simple.

Similarly, a minimalist screen User Interface (UI) often makes it hard to distinguish what are click targets and what are not. The current trend for ‘flat design’ often goes too far in eliminating visual cues as to which elements are interactive. Screen recordings we’ve made of users trying to navigate sites we’ve been asked to redesign often make painful viewing. They frequently show users clicking all over the screen trying to effect an action, before giving up.

Designers call the cues of how tools work ‘affordances’, in that an object ‘affords’ a number of possibilities of actions. The affordances of an object are related not only to its formal qualities but also the capabilities of the ‘actor’ – the user. These capabilities are informed by the prior experiences and cultural background of the actor.

An affordance is a desirable property of a UI – a display of elements and information which naturally leads people to take the correct steps to accomplish their goals. Simplicity as a design approach aims to create strong affordances.

But it also requires daring: to say no to the unnecessary; to use straightforward language; to use simple forms and uncluttered, refined interfaces.

Dare to be simple.