It’s almost 2013; years since Santa was born and we can’t wait for the arrival of another year (again). Of course, we’re well aware that a new year is set to bring about a whole raft of changes in the social media sphere. So, what are the up and coming changes you can expect to make to your marketing strategies for 2013 and as Marvin Gaye sang ‘what’s going on’? 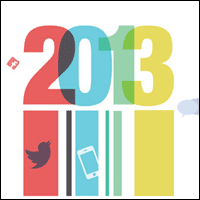 From Engagement to Relevance

Throughout the last 12 months, I must have typed the word ‘engagement’ at least a dozen times an hour – partially due to my limited vocab. However, it seems that 2013 will see a new trend beyond that of engagement. We’re moving past the days of best practice community management and towards something far more interesting.

Thanks to the likes of Facebook’s Open Graph, social media can now be used in an almost barriers free manner. Social media is set to be integrated into so much more than it already is and we can expect new levels of relevance and personalisation for both businesses and consumers alike. Keep your eyes open.

The US Presidential Election showcased 2012 as the year of mobile; however it seems that 2013 will be the year of mobile…..more so! More and more people are using their phones for shopping and even solely for browsing online and this will increase again over the next 12 months. According to an Econsultancy survey in the UK, over 29% of customers have made purchases via their mobile device. In the US there was a 28% increases in e-comm sales over Black Friday and Cyber Monday on the previous year.

Now consider the fact that 4G has arrived in the UK and you see what 2013 holds. Expect and explosion of streaming related, high quality content and all sorts of wideband innovation on mobile – you thought 2012 was the year of mobile; think again!

Both Yahoo and Google+ are going to have to impress us in the next year. The former search engine giant has made a new appointment in Google’s Marissa Mayer and there are rumours that her appointment may see interesting changes at Yahoo, specifically in the social media area.

Google+ will reach its second year in 2013 and will need to completely convince people of its worth and start winning those Facebook budgets. This will require differentiation from Zuckerberg’s site.

Conversely, Facebook looks like it could really nail it in 2013. Its advertising platform has improved significantly and financial results show mobile revenue improvements. This could all signify that Facebook is getting its Mojo back after a blip in 2012.

Keywords and inbound links have traditionally been a large part of the way to the top of SERPS. Expect more and more of an inclination towards social signals in 2013. Of course, this brings us onto the relevance and quality of content. Connecting content with social conversations and building campaigns around sharing is going to be increasingly important for rankings. Video has also benefitted of late in SERPS. Add to this the rise of 4G, more video content via mobile and more mobile use and there will definitely be changes in ranking factors.

Nothing in life is certain, but we like to think our predictions may provide some positive foresight for 2013. Time will tell.

Do you need a social media strategy for the new year? Get in touch with our experts for a detailed proposal.