A less obvious, yet enthusiastically –or even addictively – used social media site is Tumblr. The constant stream of content, super-simple interface and ease of sharing a variety of content of any length or format has made for a platform with an extremely loyal following, and it’s often the setting where the viral memes we know and love are made popular in the first place. While not widely used for corporate social media, it’s a platform with serious reach, and can form part of an effective business social media strategy. Another plus offered by Tumblr is the ability to customize your profile in some pretty cool ways – far more fabulous than Twitter backgrounds, and infinitely more customizable than Facebook, let’s have a look  at the best in Tumblr themes, from the newest of the new to some seasoned favourites.

Chunky is bold and elegant theme based around the Chunk typeface, which is reminiscent of old American Western woodcuts and newspaper headlines. It’s got a great (and rare for Tumblr) feature which is it’s magazine aesthetic – a bit like Facebook’s Timeline – where you can view everything on one page with little scrolling needed. The only thing is that I wouldn’t put white text on lime green like Chunky’s creators have done – my eyes are vibrating with the strain.

From the same development team comes Rubber Cement, a theme inspired by notebooks and journals from childhood. While not extensively customizable, its neat and tidy retro theme with a choice of colours, along with support for pages and answer posts, has become a big hit.

Matthew Buchanan designed this theme based on, you guessed it, the art direction in Esquire magazine. It actually makes for a brilliant Tumblr layout, with bright, clashing colours offset against simplicity and a bold graphic feel. 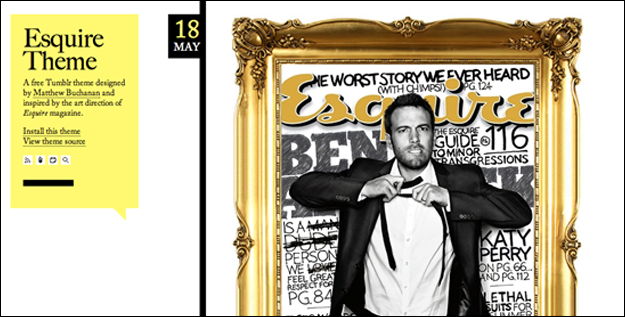 Also by Matthew Buchanan is Vertigo, again bringing a very bold and somewhat retro graphic simplicity to the Tumblr platform. Colour-wise, it’s not totally customizable, but you can change the red elements to a different shade, and Matthew recommends bright colours, as they work best against the dark background. 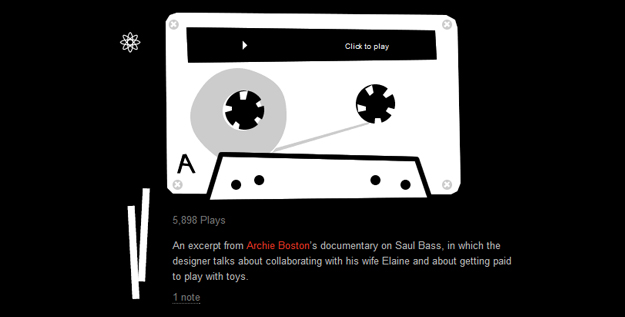 Remember what we were saying about Pimitators? Inspire well brings Pinterest’s grid format to Tumblr, and is designed for sharing creative inspiration. Unlike Pinterest, Inspire Well lets you control your grid’s layout with small, medium, and large posts. It also features extensive social network integration, working with Disqus, Google Analytics, Clicky, Facebook, Flickr, Twitter and more. This theme is also highly customisable, with 40+ options in the appearance menu.

By the same developers as Inspire Well, Savory mixes textured details (like a hand-stitched border) with clean and simple design elements. This highly-customisable theme offers its own 3rd-party support service, along with Facebook, Twitter, Disqus and Flickr integration. 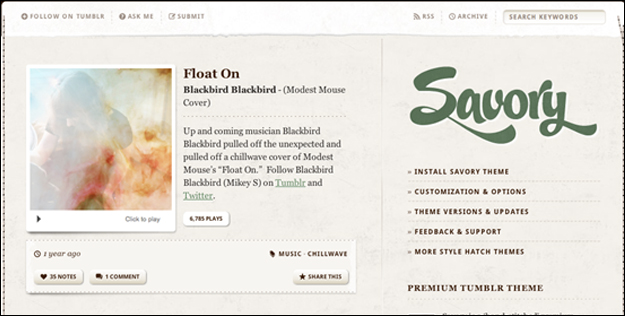 Looking for professional bloggers or need help designing a custom theme for your corporate Tumblog? Get in touch with your social media agency today.