I recently received a message from a friend on Facebook, inviting me to join them on BranchOut. I’d never heard of this particular web app before, but its purpose was almost instantly obvious; a social media network designed specifically for networking and recruitment. You’d be forgiven for thinking that this sounds familiar; my first impression of BranchOut was as a rather weak attempt by Facebook to cash in on the success of LinkedIn. So I was surprised to learn that BranchOut has been profiled in The Wall Street Journal and The Independent, and was selected to receive the FASTech50 in 2011 for innovation in technology. 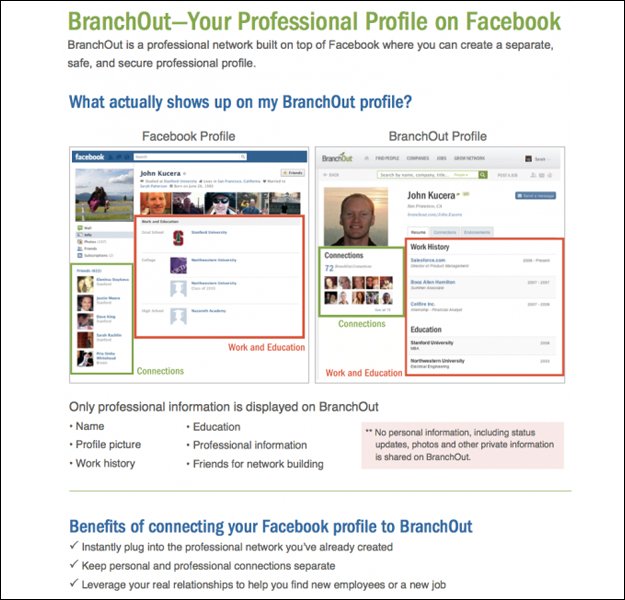 Originating back in 2010 as a widget designed to search for mutual professional contacts via Facebook, BranchOut is now used in 60 countries and 15 different languages.“Join the largest professional network on Facebook” is the app’s slogan. But why is this necessary, one might wonder, when we have a perfectly good corporate social media site in the form of LinkedIn? The BranchOut dashboard certainly includes several similarities to LinkedIn; users are able to add a summary, specialties, skills and a professional photo to their profile.

With social media becoming more and more of a factor in determining someone’s employability, MWN recruitment consultant Zlatka Aleksandrova believes that there should be a clear distinction between “work and after hours”, with LinkedIn for the former and Facebook for the latter. This assertion makes sense when you consider the increasingly popular practice of employers researching potential candidates’ online identity:you may think that you deleted that unflattering photo, but anything removed from Facebook has been proven to be visible online up to three years later.

Part of LinkedIn’s appeal is its incredibly clean and specialised nature; subscribers are there to network and seek employment, with a minimum of personal detail.  Facebook is the complete inverse; photos of nights out are posted and tagged for all to see, every other stray thought makes its way into a status update, and depending on your privacy settings, your profile can be a target for un-moderated content.

But according to the official BranchOut blog, this should not concern its subscribers: “Our use of limited information keeps your private life on Facebook and your professional profile on BranchOut. With that said, BranchOut is also the perfect place to connect with professional contacts when you do not want to friend them on Facebook.” Convenience seems to be the USP that BranchOut are shooting for here; the capability to monitor one’s own online identity, personally and professionally, from the same website.

So is BranchOut the best of both worlds? Or simply the latest in a long line of soon-to-be forgotten social media sensations? Only time will tell. In the meantime, one thing remains clear. BranchOut may well be “the largest professional network on Facebook” – but with over 150 million subscribers, LinkedIn needn’t be quaking in its boots just yet.