The saddest news this week was the story of the 9-year-old schoolgirl who, since receiving over 2m hits on her ‘school dinners’ blog, was banned by her local council from publishing any more pictures of the food online.

Martha Payne’s blog ‘NeverSeconds’ became a huge success and attracted attention from celebs such as Jamie Oliver, a tireless campaigner for healthy school meals, and raised £2000 for charity, although the BBC report the figure to be £18,000.

The entrepreneurial schoolgirl gave meals a ‘food-o-meter’ rating as well as a health rating and counted the number of mouthfuls necessary to consume the school dinners, which in the UK have a notoriously bad reputation.

However, on Friday afternoon, the press attention the story created meant that the leader of Argyll and Bute council did an extraordinary U-turn and lifted the ban with immediate effect, stating that they wanted to promote the healthy food served in their school canteen.

The controversial new Communications Bill, which was released in draft form yesterday, has been met with criticism from rights groups and consumers alike. The bill will force ISPs to retain details of people’s internet use such as webmail, VoIP calls, social media activity and online gaming.

Home Secretary Theresa May said that the move is necessary in order to be able to track criminal activity and terrorists, although it would seem to us that cybercrims and terrorists are pretty good at covering their tracks in general.

Jim Killock, executive Director of the Open Rights Group said on Thursday: “Today Cameron is appearing at the Levenson Inquiry, and at the same time the government is releasing its plans to snoop on the Internet. This is a very bad sign that they want to ‘bury bad news’.

UK LulzSec suspect charged in the US

A 20-year-old UK man, Ryan Cleary, has been formally charged in the US federal courtover hacking offences, which he allegedly carried out whilst a member of notorious ‘hacktivist’ group LulzSec.

Whilst he will be unable to answer the charges in person, due to being locked up in a UK jail for breaking bail conditions, they include the allegations that he hacked into several US companies including Sony, Fox and the US version of hit talent show X-Factor.

In the UK, he faces charges of illegally accessing UK police agency site Soca, as well as several music sites. His bail conditions forbade him from accessing the internet, but it would seem that the hacker just couldn’t help himself, thus ending up in prison.

If he does manage to get to the States, he could be looking at a hefty 25-year prison term for his crimes, which also include defacing sites and stealing information.

Apple’s first ever computer, the Apple 1, has been sold at a Sotheby’s auction for £240,929, more than double the highest estimate that the auction house valued the computer at. A memo written by Steve Jobs when he was with Atari has also gone under the hammer and reached an impressive £17,415.

Only 200 of the Apple computers were ever made and sold at the time for £426, just 50 more are believed to be in circulation, although it’s unknown whether they are still functional, as the one sold at auction is.

Whilst the untimely death of the Apple founder no doubt forced the price of that and other Apple memorabilia up, it’s interesting to note early technology products going for such high prices.

I have a fully functional Sinclair QL, complete with handbooks, monitor, ‘discs’, printer and manuals in my cupboard which I’m hoping will reach a similar price when I too achieve world domination, although preferably whilst I’m still alive and kicking.

Domain name regulators Icann have revealed the full list of applications they have received for new domain name suffixes. A total of 9030 requests were made for new names, which include endings such as .ninja, .sex, .music, and .shop.

Once names are approved, Icann will begin rolling them out in batches of 500 from March 2013; applications for the new gTLDs cost £118,800, just for requesting a suffix, and those who successfully secure a gTLD can expect to pay a minimum of about £16,500 each year if they want to keep it.

It’s thought that Google has applied for “dozens” of the suffixes which include, unsurprisingly, .google. Others Google are attempting to snap up are .boo, .new and .music, which are also being pursued by Amazon, amongst others.

An amusing post on Star Trek legend George Takei’s Facebook page on Friday attracted a large number of likes, totalling 13,010, just an hour after the star made the post. Pictured below, we’ll let you make your own minds up on the reasons so many of George’s fans found it hilarious … 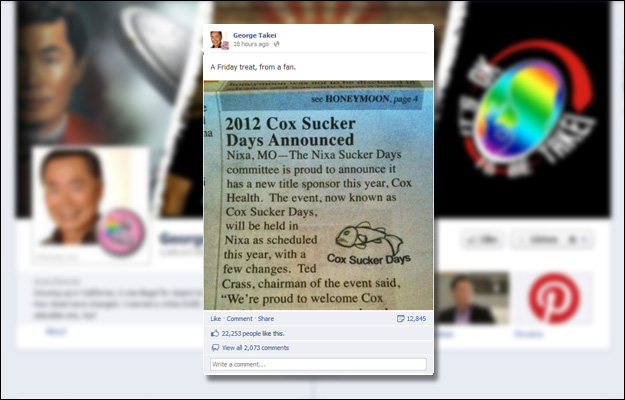 We bet that President Obama has envisaged himself topping quite a few political charts, since he made it to the White House. But this week he’s found himself at the top of the Guardian viral video chart for singing, or rather for being the subject of a cleverly compiled mix, which sees him ‘singing’Call Me Maybe, which you can viewing below.