Microsoft have this week done away with their 25-year-old ‘flag’ logo and are going for a more retro look, with four squares featuring the Microsoft colours and an improved, updated font to go with it. 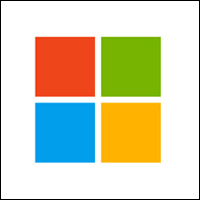 “From Windows 8 to Windows Phone 8 to Xbox services to the next version of Office, you will see a common look and feel across these products providing a familiar and seamless experience on PCs, phones, tablets and TVs,” said Jeff Hansen, General Manager and Brand Strategist at Microsoft.

Whilst the new look Microsoft will apply to all new products that the company are about to launch, legacy versions of software such as Windows and Office will retain the old logo.

There’s been mixed reactions from techy types, some designers asking why it’s taken 25 years to come up with such a simple logo with others saying that this is necessary if MS want to continue to compete, now that Apple is officially the richest company in the world.

Of course, MS will be hoping that Surface and Windows 8 will make a sizable dent in Apple’s tablet market domination, but many remain sceptical that it will even make a splash in the corporate, let alone consumer, markets.

I guess we’ll all see come October when Surface comes out, but an initial rush to buy may not be proof that MS can topple Apple from their perch.

A new variant of malware has been discovered that infects Windows, Mac OSX and VMware, thought to be the first of its kind in the world of cybercrime.

It’s thought that the malware uses “social engineering techniques” to infect users, although Kaspersky didn’t expand on how this is carried out. Social engineering is often linked to phishing attacks and viral photos of celebs and such like on social networking sites such as Facebook.

Once it has infected a machine, the ‘Crisis’ malware has the ability to copy itself to removable drives such as pen drives and external USB hard drives. It also checks for instances of VMware.

“The threat searches for a VMware virtual machine image on the compromised computer and, if it finds an image, it mounts the image and then copies itself onto the image by using a VMware Player tool,” security experts at Symantec explained.

This means that “this may be the next leap forward for malware authors,” they observed. “Symantec detects the JAR file as Trojan.Maljava, the threat for Mac as OSX.Crisis, and the threat for Windows as W32.Crisis”.

As always, it’s a good idea to ensure that all security products are up-to-date, as well as Windows/Mac updates, browsers and third party software such as Flash and Java. Also avoid clicking on shared pictures and videos on social networks and don’t click through links in an email unless you’re absolutely sure they’re from a trusted source.

Facebook has been forced to recode its iOS app following complaints that the existing app for iPhone and iPad is too slow to respond. It seems the original idea of writing the app in HTML5 hasn’t really worked out for FB and as such it has been completely rewritten in Objective-C.

This means that the new version should perform faster and smoother than the previous version, let’s hope it also addresses the problem of shutting itself down whilst viewing photos.

“The existing app suffers from endless loading, refresh problems and feels more like using a website from the late 90’s,” wrote Malcolm Barclay for the BBC earlier this year.

“To put it another way, it is like listening to a transistor radio… HTML5 can run on many different devices (eg Android), hence it costs less to maintain and there’s no need to make separate apps. I doubt Facebook really benefited from this – users certainly did not.”

The improved version will also allow for advertising, something that the social network has been intending to add to the mobile platform following disappointing results in its recent stock market floatation.

The FBI has been instrumental in helping US authorities to block access to three sites which offer pirated copies of Android software. According to the BBC, “the sites involved were applanet.net, appbucket.net and snappzmarket.com”.

“The theft of intellectual property, particularly within the cyber-arena, is a growing problem and one that cannot be ignored by the US government’s law enforcement community,” said the FBI in a statement.

“These thefts cost companies millions of dollars and can even inhibit the development and implementation of new ideas and applications.”

Whilst this is the first time that the authorities have been involved in piracy involving mobile phones, it’s really just a continuation of the US efforts to enforce legal action against those who run sites offering torrents or any other form of illegal download.

The Android platform has been widely criticised for the open nature of it and incidences of mobile malware, especially banking trojans, have increased rapidly in the past few years and continue to do so at a very rapid rate.

Whilst we all await the inevitable Zombie Apocalypse, the makers of the below video decided to carry out an experiment to see if zombies really could live amongst us as useful members of society (albeit somewhat gross, not that I’m zombiest or anything).

The experimental involves zombies wandering the streets of New York, shopping, carrying out jobs and generally just going about their undead business – the reactions of the New Yorker’s vary, it’s definitely worth a laugh.

To learn more about our social media services, click here.