This week’s techy round-up includes the unveiling of Google Drive, the long awaited competitor to Dropbox and other cloud based storage which finally launched on Tuesday to a fairly good reception. The search giant produced a goody, it seems, with decent integration, cracking search facilities (as you would expect from the world’s biggest engine) and a Mac version that, according to some reports, crashes as soon as you attempt synchronisation. Oops.

There is little in the way of mobile support for Google Drive at the moment too, something that the big guys say that are working on to bring quickly to iOS and other platforms.

Staying with Google on a lighter note, today saw the launch of Easter Egg game ‘zerg rush’ – head over to Google and type in zerg rush and watch your search results get eaten away whilst you frantically attempt to click on coloured circles. These appear on the screen from every direction and it’s a race against time to preserve results before the search engine destroys them.

The more you click, the less damage will be done to your results and at the end you even get the opportunity to submit your results to Google. It’s not we have anything better to do, right? 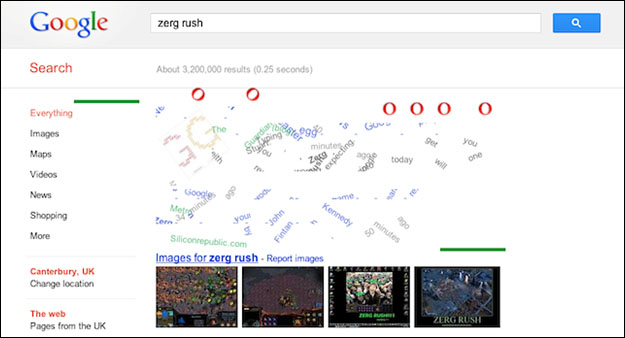 Facebook teamed up with some of the biggest names in antivirus solutions this week and will be offering a free antivirus installation (in some cases a trial version) of leading software.

The social network will be sharing its dodgy URL list with five AV vendors: Sophos, Microsoft, TrendMicro, McAfee and Symantec will all be offering products and regular advice blogs on the Facebook Security page.

You can find your free software at the newly set-up FaceBook Antivirus Marketplace, let’s hope the combination of security intelligence and the freebies clean up the site and stop the rapid spread of survey scams, malicious links and other nasties.

The controversial Digital Economy Act has been delayed again due to wrangling and hold-ups over the code of practice to go with it. It’s thought that the act will now remain dormant until 2014, something which has the ISPs breathing a sigh of relief.

The act was pushed through in 2010 by the Labour government just before they left power and has been criticised far and wide for everything from potential harm to innovation and the free web, to the obvious lack of digital understanding displayed by the government.

Whilst it initially came under fire from the Conservatives, it seems they have forgotten this now as they attempt to push various laws through to spy on its digital citizens and tackle piracy.

It seems that the best solution to the intellectual property problem would be to overhaul the movie industry to include the distribution of digital content; however, movie moguls seem more inclined to spend the cash chasing down piracy through the courts as they continue to apply pressure to governments the world over to make a civil matter criminal.

Apple are continuing to impress in their quest for world domination this week as it emerged that profits for the first quarter were double those of last year. This was thanks largely to the 35 million iPhones that they shipped, pushing net profits to the tidy sum of $11.6bn (£7.2bn). However, iPad sales fell just short of expected figures at 11.8 million units sold, rather than the expected 13 million.

DNSChanger may mean internet blackout for some

The FBI has warned that up to half a million PC users could face an internet blackout if they are still infected with the notorious DNSChanger trojan. The perpetrators were arrested late last year but the temporary fix that the feebs put in place, the replacement of dodgy DNS servers, ends on July 9th.

This means that infected machines will no longer be routed through a DNS server at all and will be unable to access the internet or use email. However, there is a simple fix available and the FBI has a form on their site to check for infection, along with comprehensive cleaning instructions.

Froggy fun – well, not that much

And finally we’ll leave you with the Guardian’s favourite viral video of the week, of a frog who could be a contender to romance Miss Piggy and tell Kermit where to get off; you’ll see why when you click to watch this very human looking little guy.