The big news this week remains the Facebook IPO, as the eagerly awaited event is thought to be the largest floatation in US stock market history. The social media company announced on Thursday that they would be selling even more shares and demand is high, despite the mumblings of some critics that Facebook may have no real longevity when it comes to making money. 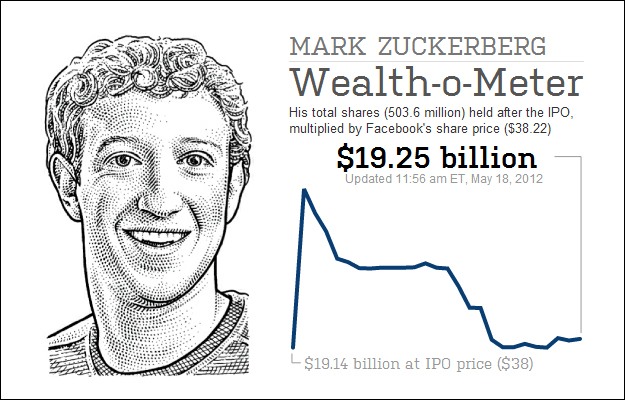 The social network (and us) think otherwise of course, the site now has a huge 900 million users, roughly 1/8th of the world’s population and whilst its advertising model may have been slow to take off, there are plenty of other money-making opportunities, such as its mobile app and gaming platforms.

Further concerns over snooping have been raised over the news that the Metropolitan Police will have the power to extract personal data from mobile phones when someone is arrested. Whilst many of us would happily accept the thought that criminals can be brought to justice by going through a phone that’s been used in a crime, it seems that the Met don’t have to bring charges in order to retain the information.

Rights group Privacy International have “raised serious concerns” over the new law, which allows officers to extract and print off data at a terminal in stations and say that it’s potentially illegal.

Japanese investors led by etailer Rakuten have given popular photo-driven social media site Pinterest a $100 million boost this week, proving that the site’s star continues to rise rapidly. According to The Wall Street Journal, this puts Pinterest at a value of $1.5 billion, a significant increase on last year, when it was valued at a mere $200 million.

The Japanese online retailer will also partner with the site in a bid to further promote it in their home country.

Encyclopaedia giants Wikipedia have warned users that if they see advertisements when visiting the site, then it’s highly likely they are infected with malware. The site made the announcement through an official blog post where they said that they are funded by donations, not advertising revenue. This means that users who see ads when visiting the site have most likely had their browser infected with some form of malicious software.

The only other reason that users might see ads is if their internet service provider is injecting them into their web browser without their knowledge, something which is most likely to be the case when using free Wi-Fi connections. Browser extensions could also be a suspect and it’s advisable to take care when installing these, especially those that appear to offer goodies such as free vouchers.

“We’re here to distribute the sum of human knowledge to everyone on the planet — ad-free, forever,” Wiki said in the blog.

Following the news last week that Bing are to become more social, with their new Facebook-friendly social bar, Google has announced that its search results are to become ‘more human’, thanks to the new ‘Knowledge Graph’.

The latest new algorithm enhances the existing search function so that words that are typed in are more easily recognised. This means, for example, that if you type in a word that can mean more than one thing, the search engine will recognise the difference and narrow results accordingly in order to test which one you mean.

The new function will use about 3.5 billion resources to organise results and in some cases pull up a summary box highlighting key information for popular searches.

The enhanced search is thought to be the first step in working out more complex searches and will initially be rolled out in the US, with the rest of the world following soon after.

Topping the Guardian viral video list this week was the novelty of watchingHRH Prince Charles reporting the weather. The prince was touring BBC Scotland when he was invited to front the lunchtime weather forecast and joked: “Who the hell wrote this script” as he reported on the abysmal weather conditions coming to Balmoral.

The full version of the forecast can be seen below:

My Social Agency is a digital marketing agency based in the UK with teams in Leeds and London. Get in touch today to learn more about our services.