There were several rumours flying around last year that social networking giants Facebook might have hooked up with HTC in order to bring out a Facebook mobile phone, but nothing ever came of them in the end, until now, that is.

In November, All Things D reported that the Facebook phone was becoming a reality and the company were already working with HTC on a project code-named ‘Buffy’, after the famous vampire slayer of the same name. It was thought that the team at Facebook were working on a modified version of Android that would allow them to integrate Facebook products deeper into the UI.

Should the new Facebook phone prove to be more than a rumour, let’s hope it includes new concepts designed to kick ass as much as its slayer namesake does. A dedicated, Facebook branded smartphone could very well help the social media site’s share prices, which took a bit of a dive following the IPO last week. Critics have suggested that Facebook are not yet geared to make money in the long term – however, Mark Zuckerberg has said that the company will be focusing its efforts on the mobile platform and many have assumed that this would take the form of mobile apps and perhaps gaming.

However, if whisperings around the industry prove to be correct, it would seem that it’s just as likely that the social networking site will be concentrating on hardware, which would be a first for the company.

According to a report from the New York Times, several Facebook employees and engineers have hinted that a mobile phone will be released by the company some time in the next year. Of course, the sources were anonymous, so as not to upset the employment applecart, but it seems that Facebook have snapped up more than half a dozen ex-Apple employees who worked on the iPhone.

These new Facebook acquisitions are now said to be working on Buffy, something which Facebook and Mark Zuckerberg have failed to either confirm or deny.

However, according to one employee at the social media company “Mark is worried that if he doesn’t create a mobile phone in the near future that Facebook will simply become an app on other mobile platforms.”

Alongside the rumours, there is also plenty of speculation as to whether Facebook have got the technical know-how to enter what is an incredibly complex market. The hardware market is of course inherently different to that of software and this means that Facebook may encounter problems which it has previously been able to overcome, which is why the phone project has apparently been shelved a number of times.

“Building isn’t something you can just jump into,” former Apple employee Hugo Fiennes told the NYT. Fiennes worked on the first four Apple iPhones before leaving to set up his own hardware company; Apple is one of the few software companies that have successfully managed to combine the production of both hardware and software.

“You change the smallest thing on a smartphone and you can completely change how all the antennas work. You don’t learn this unless you’ve been doing it for a while,” he went on to explain.

However, Facebook are ideally placed to purchase a struggling smartphone maker such as RIM, who is finding it difficult to get developers to produce apps for their new Blackberry. According to the NYT, RIM is currently worth less than $6bn, easily affordable for Facebook in the wake of their IPO.

Recent news reports have stated that RIM continues to struggle as the iPhone further dents Blackberry profits. It’s thought that the company will be laying off up to 6000 staff next month following disappointing financial results for last year. Last summer, RIM axed 2000 employees amid falling profits as it failed to push out new products on time.

The smartphone market is an incredibly competitive one and should Facebook be successful in it endeavours to bring out a successful, branded device of its own, then that would certainly silence the critics who have driven down the share prices for the company recently. 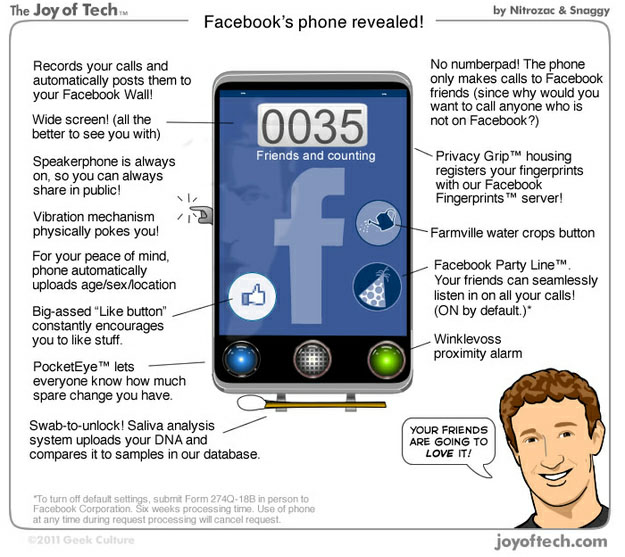 However, it’s unlikely that Facebook will be able to compete on the same level as the iPhone or Samsung Galaxy, so it will have to come up with a good money-making model in order to achieve any financial success.

As a long-time Buffy fan, I might buy it just because of the slayer association, but I doubt that this will be the case for many others, although the novelty of a Facebook phone may be enough to make it a success in itself.