Is LoveIt more than just a copycat social network?

There’s a new social network on the block which is set to make quite the stir. Yes, that’s right, another one. At first glance, LoveIt appears to be indistinguishable from Pinterest, the digital pinboard du jour. And that resemblance is intentional; the creators of LoveIt are hoping to capitalise on the immense popularity of Pinterest by adopting (some would say stealing) the familiar model and merely tweaking it in regards to its functionality and purpose. 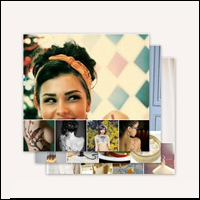 No secret is made of LoveIt’s similarities with Pinterest – on the home page, newcomers to the site are invited to import content from their Pinterest, Flickr and Tumblr accounts, ultimately putting LoveIt forward as a centralised visual network. However, unlike Pinterest, which claims broad rights to all visual material, LoveIt’s terms and conditions are clear; content posted to the site is the property and responsibility of that individual distributor.

The unique selling point here appears to be the specificity of LoveIt’s privacy settings; images are not simply posted and shared across all your Facebook or Twitter contacts. Instead, it is possible to curate private collections, and to pick and choose who sees what – which should come as welcome news to anybody who is familiar with Facebook’s notoriously complex privacy settings.

One of the rather odd key examples used in LoveIt’s introductory slideshow is: “Plan your perfect wedding on a private collection: because what if you’re not engaged yet…” Rather than sustaining the upkeep on that scrapbook they keep in a shoe box under their bed, singletons now have the option to get carried away digitally. But this function has a more immediately apparent benefit to businesses; LoveIt offers a Dropbox-like area in which confidential content can be viewed, shared and edited remotely, making it an ideal brainstorming tool for the creative industries.

A new breed of social networks

LoveIt is the latest in a new trend of copycat social networks. Earlier this year, Conservative MP Louise Mensch launched Menshn.com, a politically focused alternative to Twitter, and became a target for widespread scorn in the process. Meanwhile, avid fans of pop icon Lady Gaga were treated to LittleMonsters.com, a “social corridor” from Backplane which included a Pinterest-style visual appeal, with more than a hint of Facebook to it as well.

Niche social networks have absolutely exploded this year, and range from the vaguely morbid, such as the bucket list app My Last Wish, to the whimsical; Cyloop could be described more or less as Pinterest for music lovers, while Untappd is a mobile-based social network in the model of Foursquare which exists solely to allow its users to post what kind of beer they are currently enjoying, and where.

So is LoveIt worth our time?

As is the case with every new social network, it is impossible to say whether LoveIt has long term sustainability, or if it will experience the same popularity as its predecessor Pinterest. The shared creative workspace should certainly be of interest to design and architecture agencies, and it may well be that privately curated digital image collections will replace under-the-bed scrapbooks once and for all. Only time will tell.

To hear more about our app development services click here.