Love it or hate it, Facebook’s introduction of the timeline is allowing for some interesting features – one of which are the newly-announced integrated Facebook timeline apps, aka Open Graph apps.  Billed by the developers as an aid to “help you tell your story” based on your interests, critics worry that their introduction is making social media behemoth Facebook way too much like MySpace and Bebo.  So far though, there’s a distinct lack of flashing glittery animation taking over your profile, so I think we’re relatively safe for the meantime.

Adding an app and interacting with it allows you to enrich your profile, but as well as amassing data there, it will post on your behalf to your newsfeed (and the ticker), allowing your content to be shared with and by your friends.  So depending on what app you’re using, they’ll be able to see what you’re listening to, or reading, or cooking. If you’d rather not have your obsession with one hit wonders of the 1980s broadcast to the world then you may want to be careful about privacy settings when you install, maybe even organising your friends intovery specific lists and then exclude/include them for particular types of updates.  With the company’s new “frictionless sharing” policy, apps only have to ask your permission once to share your content, so it’s worth keeping an eye open.

There are around 80 of these timeline apps at the moment, but it’s not going to stay that way for long.  And that’s because in terms of social media marketing, it’s a massive opportunity – both for data mining and in the sharing of content.  For brand social media, it’s a game changer.

Here’s a few of our favourites:

Spotify hit the headlines when they partnered with Facebook recently, and not of it was good publicity – the fact that you now need a Facebook account to use Spotify didn’t go down particularly well in some quarters.  But in terms of discovering new music, and reflecting the changing way in which music is consumed, it’s unrivalled.

As I’ve said before, Pinterest is a great little app – for “pinning” cool stuff you find around the web to a virtual pinboard.  Although it’s been around for a while, it’s seen a surge in popularity just recently, and the launch of the Facebook app may well be its big break.  Brands are starting to see the value of this in terms of social media marketing, and it’s becoming more common to see a “Pin This!” button next to “Tweet” and “Like”. 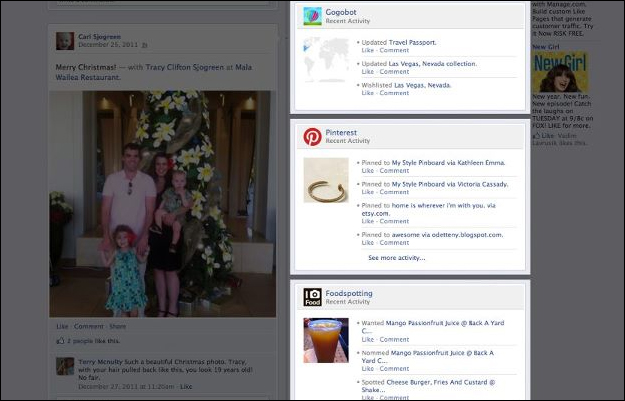 Facebook have said in the past that their site is not a place for charities to raise funds, but a way for them to engage with their donor base.  They’re keen for you to stay on the site though, and Facebook timeline apps like JustGiving’s have facilitated the gathering of donations without leaving Facebook.  FundRazr is open to individuals, non-profits and political parties/candidates, and goes one step further, allowing you to take payments through Paypal.