In an innovative (and possibly precedent setting) use of social media, the Swedish government has handed the country’s official Twitter account (@Sweden) over to a different citizen each week, with the aim of increasing interest in tourism. And while the social media campaign has been in fact running since December 2011, it came to global attention very recently, after this week’s current tweeter Sonja Abrahamsson posted tweets regarding Jews and Nazis.

Unsurprisingly, the incendiary subject matter sparked an international debate over whether the mother-of-two’s tweets should be deemed offensive or not. It was ultimately stated by Maria Ziv, a spokeswoman from VisitSweden, that the tweets in question would not be removed. 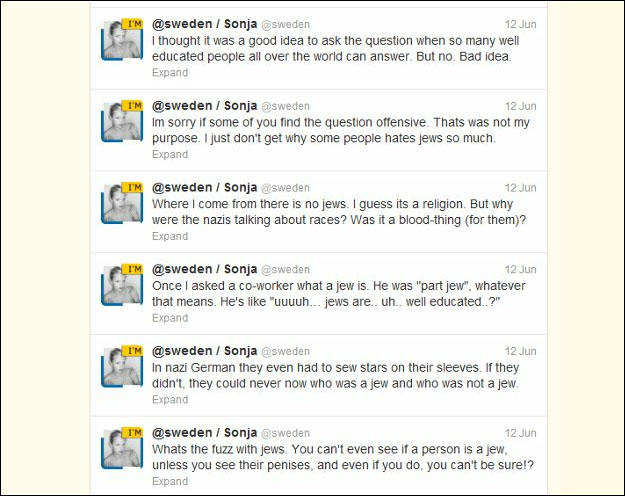 The offending remarks came less than five minutes after SonjaAbrahamsson clarified in a tweet to BBC technology reporter Kate Russell that the purpose of the social media exercise was not to directly promote Sweden, but rather to simply be herself. The next day, Russell tweeted “I had to sit on my hands most of the day so as not to get involved – she [Abrahamsson] will do her own thing anyway, right?” 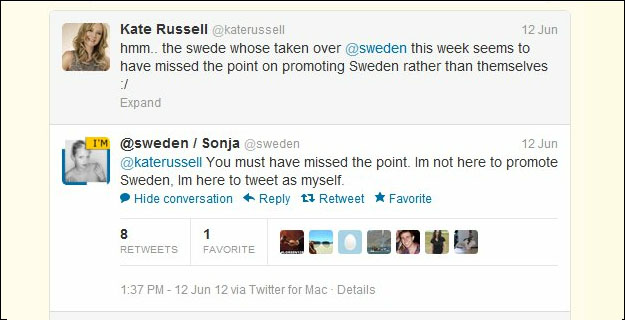 On top of her tweets about Jews, Sonja Abrahamsson has also caused a stir by posting a photo of herself breastfeeding her son, and a Photoshopped image of Freddy Mercury staring at some food, with the caption “This pic I call ‘hungry gay with aids’”. Tweets from the @Sweden account do not undergo any kind of moderation before becoming visible to the public, and can therefore include all manner of content. When writing about politics and current affairs, account users are merely required to include the hashtag #myownopinion.

But while some Twitter users are horrified at Abrahamsson’s supposed misuse of the @Sweden account, others are applauding her for shaking things up a little, and for showcasing herself as a less sanitised, more fallible ambassador for her country. At this rate, Sonja Abrahamsson may fast become the face of Swedish social media. She is already competing with Lisbeth Salander, the fictitious “Girl with the Dragon Tattoo”, for the title of most infamous Swedish female.

And perhaps that was the goal of the project all along; earlier in the month, before Sonja-gate, Malin Nyberg from VisitSweden told the BBC: “This is really just showing how many different kinds of people there are in Sweden. By doing this, people will get more interested and curious about Sweden.”

So what do you think? Is there really no such thing as bad publicity? And how do you think your country would fare, if it allowed its citizens to become international representatives via Twitter? Let us know in the comments.

My Social Agency is a social media marketing agency based in the UK with teams in Leeds & London. Get in touch today to learn more about our services.