It should be an unspoken rule of life that you do not create a Twitter account if you are going through a breakdown; the temptation to broadcast every stray thought and impulse is just too great. Perhaps Charlie Sheen has finally learned this lesson, as he signed off from the social network last Thursday with the message; “Reach for the stars everyone.”

Below are five celebrities, including Sheen himself, who have made the most of the micro-blogging site to make themselves look very foolish indeed.

Sheen joined Twitter in March 2011 and used the platform to vent his frustrations over being fired from hit show Two And A Half Men. But his wild, self-mythologising ramblings about “tiger blood” and “Adonis DNA” soon showed that he had no intention of going gently into that good night. He broke the Guinness World Record for being the fastest person to reach one million followers, inadvertently released his mobile phone number to the public and gained considerable notoriety for supposedly tweeting mid-coitus with his girlfriend. And then of course he spawned his greatest legacy, the now infamous “#winning” hashtag.

Ashton Kutcher replaced Charlie Sheen as the lead in Two And A Half Men, but being a part of that embarrassingly bad show is not what gets him to the top of this list. Back in November 2011, Kutcher tweeted that Penn State University were wrong in their decision to fire football coach Joe Paterno, saying the move showed “no class”. At the time of tweeting, Kutcher was unaware that Paterno had been fired for allegedly covering up over 46 years of sexual abuse by the school’s former football defense co-ordinator Jerry Sandusky – proof that one should get their facts straight before speaking out. All of a sudden, Kutcher was very keen to hand the reins of his Twitter account over to his team.

After being removed from a plane for refusing to switch off his mobile device during take-off (he was in the middle of a game of Words With Friends), Baldwin launched something of a Twitter feud with American Airlines, and encouraged his 600,000 readers to unfollow him en masse, in the hopes of crashing his account in protest. Things all got a little silly, and Baldwin ultimately resurfaced on Twitter with a brand new handle.

Politicians have been getting away with personal indiscretions for years. But New York congressman Anthony Weiner learned the hard way that it is rather difficult to cover your tracks once you have accidentally posted lewd pictures of yourself on the internet. Weiner tweeted a topless self-portrait in 2011, believing that it had gone to a female acquaintance via direct message. He was soon made aware that images could not be sent via private messages, and the photograph sparked a national scandal. There have been no tweets from Weiner’s official account in over a year. 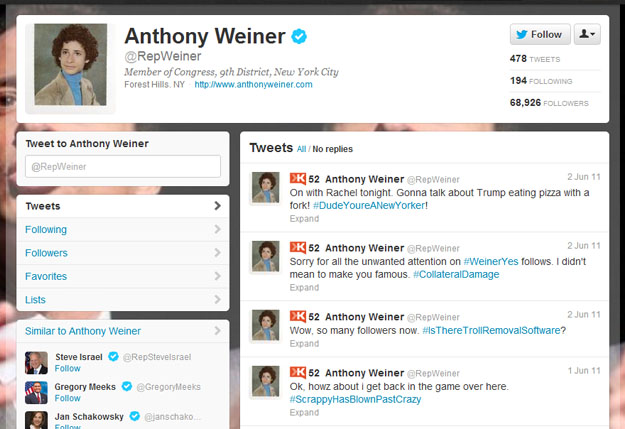 In a cringeworthy case of badly misjudging a sensitive situation, fashion designer Cole wrote this tweet about the political unrest and violence in Egypt last year: “Millions are in uproar in #Cairo. Rumor is they heard our new spring collection is now available online”. Predictably, the tweet was met with a less than amused response, and Cole promptly apologized.