Social media is headed for the stars.The Gliese 667 star system, in the Scorpius constellation, to be precise.Conceptual artist duo Scott Kildall and Nathaniel Stern are currently in the process of funding a project that will see them transmitting messages from the micro-blogging site Twitter to the exo-planet GJ667Cc. In English, that’s the closest planet to Earth which is theoretically capable of supporting humanoid life. 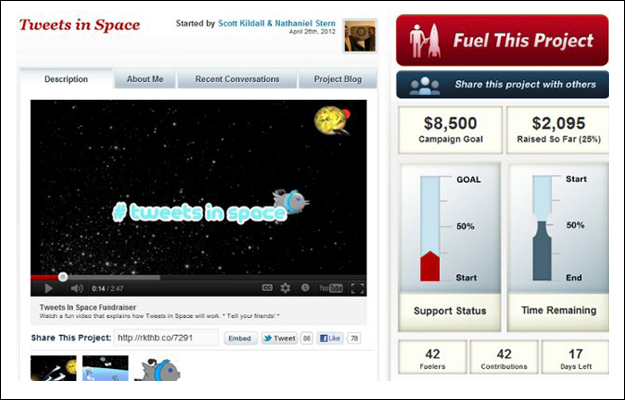 The project, dubbed Tweets In Space, will be made possible by a high speed laser-based communications system, which can beam real time text messages into space. The transmission is scheduled to take place during a live broadcast in September at the 2012 International Symposium on Electronic Art (ISEA) in Albuquerque, New Mexico.

It was only a matter of time until Tweets In Space or something of its kind came along, ever since Mike Massimo became the first astronaut to send a live tweet from space in January 2010. But the beauty of this project is that the world and his wife can get involved. During the live broadcast, Kildall and Stern will collect all tweetsthat feature the hashtag #tweetsinspace and include them in the transmission.

Kildall and Stern have previously worked together on WikipediaArt, a collaborative art project which encouraged a multitude of users to edit and moderate live content. This interest in an online community extends to Tweets In Space, where anybody and everybody is welcome to contribute. Forget the elitism of NASA; as Kildallproudly states in the explanatory video; “We want to democratise the universe.”

The project’s secondary aim, Kildall explains, is not only to reach out to any alien neighbours via social media, but to also create a sense of community in the process: “By structuring this project as a performance, we will have a live component where people can respond to each other’s tweets in both physical space at ISEA, and at home, through the Tweets in Space website… Each tweet can then build upon the previous, so that extraterrestrials who are listening could hear a whole conversation rather than single short messages.”

It certainly beats writing sarcastic tweets from one’s armchair while watching Britain’s Got Talent. And who knows; Kildall and Stern’s Tweets In Space project might just be the next giant leap for mankind.

What would you say to any extra terrestrials who might end up reading these tweets? Take one small step for man, and let us know in the comments.

My Social Agency is a digital marketing agency based in the UK. Get in touch today to learn more about our social media marketing services.