The Chinese love social networks and is dubbed in certain circles as the most active social country in the world. Whilst Facebook has been blocked in the country since 2009, China’s own social media sites are enjoying huge success in their own right.

Of course Chinese users can’t even use Twitter, which has seen its user base almost doubled since 2010 (see below). It’s estimated that people tweet one billion times per week now, although it took Twitter 3 years, 2 months and 1 day to reach the 1bn tweet milestone initially. 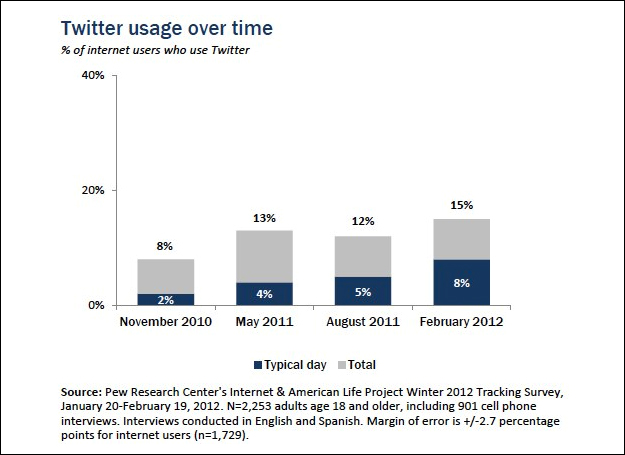 In March alone, 572,000 new Twitter accounts were created and as many digital marketers know, it represents a great way of maximising your web presence and strengthening your company brand. Bearing in mind that the Chinese economy appears to be slowing down, it would make some sense for the Chinese government to utilise the power of international social media, rather than their own, home-grown versions.

However, as far as government policy in countries such as China goes, ours is not to reason why. Chinese social networks are growing at a brisk pace though and it seems very clear that users in that country have taken to social networking like a duck to water; 95% of Chinese residents in the major cities use social networking sites. Of the Chinese social media sites, the most popular by far is QZone, with a 560 million user base, following that 51.com has 200 million and Renren, 147 million.

Should the Chinese government ever relax their censorship somewhat, this would open up a whole new user group for Western social media sites to exploit. Of course, this is all speculation and certainly not something we can see happening at any time in the near future, as great as it would be for the net to be truly ‘free’.

Whilst China is seen as an emerging economy, it certainly wouldn’t do their copious exports any harm to be able to market their products across social media.

Moving away from China, yet staying with the worldwide use of Twitter, this week saw Venezuelan President, Hugo Chavez, not only ban all private gun sales, but he was generous enough to give away a free house to his 3 millionth Twitter follower.

When 19-year-old Natalia Valdivieso clicked follow, the last thing she would have expected is to come away with a free house just for a simple follow. The lesson to Tweeters everywhere? Following others does you good, although perhaps rarely that good. However, following translates into followers, which goes on to retweets, which makes people interested in your business, which drives traffic to your site and … need I go on?

The point is, wherever you live, whatever your business or even personal interests in social media, there’s no denying that the medium now holds the power. Print advertising is the least trusted medium, with a mere 9% of people trusting the contents of a print advertisement, whilst 90% of people trust recommendations from friends as far as following a company on Twitter, Facebook, or Pinterest and so on.

Whist I say that the medium holds the power, this isn’t strictly correct; the consumer holds the power and this, perhaps, is why China makes sure that its citizens don’t have access to Western social media and search. This would of course, empower the people, give them a voice and alert the world to how they may feel, as illustrated perfectly by what happened with Egypt.

Consumers hold power in the west, people do even at a political level, if the latest u-turn on the ‘pasty tax’ is anything to go by. The UK government must be sickened by the level of Facebook-generated petitions they get these days, so it’s no wonder we’re starting to see censorship creep into Western internet usage too.

My Social Agency is a Digital Marketing Agency with teams in Leeds & London. Need help with your social media marketing campaigns? Get in touch with us today!