There’s certainly a ‘changing of the guard’ taking place in the mobile enterprise world. Whereas most offices over the past 5 years or so have been dominated by RIM’s BlackBerry range of devices, the trend toward ‘Bring Your Own Device’ policies has seen many companies – especially small to medium sized businesses – shift over to iPhones and Android devices (with iPhones also being increasingly popular on business contracts). Unlike BlackBerry and iPhone, Android isn’t typically associated with enterprise use, but the Google Play app store is second only to Apple’s App Store when it comes to the breadth and quality of business applications available. Here are five of our favourite Android apps geared toward productivity. 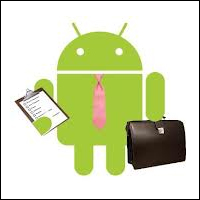 If you want to access, edit and create documents on the go then you’re going to need an file editing app of some kind that works well with Microsoft Office. There are a few document editing suites available for Android, but one of the oldest, and certainly the most polished, is Quick Office. This app lets you create and edit virtually any MS Office document, including spreadsheets, presentations, PDF files and Word files. There’s also a spell checker on board and you can give PowerPoint presentations directly from your phone or tablet. Essential for any Android business user. If you find writing emails or text messages on Android’s default touchscreen keyboard a bit too fiddly, then check out SwiftKey. This app has won numerous awards over the years and aims to speed up typing by letting you drag your finger across the keyboard, rather than tapping each individual letter. SwiftKey then uses advanced predictive text software to accurately guess the word you’re trying to write. It’s a bit hard to explain, but trust us, SwiftKey will almost certainly speed-up your typing. We’ve all been there. You’re rushing to a meeting, or took some work home with you, and the file you need is sitting on your desktop computer, out of reach. With the rise of cloud storage, remote access apps aren’t as essential as they once were, but they can still be life-savers. PocketCloud is one of the best remote access apps for Android. Just install the app on your phone and desktop and you can access documents, applications and pretty much everything else. It’s a bit pricey (£12) but worth it. While MS Office is still the standard in most offices across the UK, Google Docs is gaining in popularity, and the more Android infiltrates businesses, the more traction Google’s apps suite is likely to get. But even if your office doesn’t use Google Docs, it’s still worth picking up this app. The mobile version works very well and is great for writing down notes, before accessing them on the desktop version and fleshing them out into full documents.

There are quite a few note-taking applications out there, but the two most popular are Evernote and Catch. I like Evernote, but I find the simplicity and Twitter-like interface of Catch suits me better. With Catch you create ‘ideas’, which are then divided into ‘notes’ (each note can have comments added to it). Plus each note can be assigned a Twitter-esque hashtag, so you can catergorise between ideas. As with Evernote, Catch lets you attach pictures and sound files, as well as regular text, to the notes you create, and you can access them all via the website desktop platform.