Apple’s App Store is overflowing with apps designed to get you in-shape, with everything from Yoga-themed workout regimes, to strength-building guides. But trying to sort the wheat from the chaff on the App Store can be a workout in itself, so to save you time we’ve rounded-up five of our favourite iPhone fitness apps. 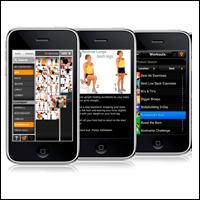 Not only is Zombies, Run! one of our favourite iPhone fitness apps, it’s one of our favourite mobile apps full stop. It’s a cross between an augmented reality game and a workout course. Players take on the role of ‘Runner 5’, a character that has to rebuild their base following a zombie invasion. You’re given a series of missions, which involve running various distances in certain times. Throughout the runs audio of approaching zombies is pumped through your earphones, as well as story narration and objectives. Zombies, Run! is a really fun and novel way of keeping fit. If you’re aim is to build strength and muscle, but you don’t have any dumbells and don’t fancy signing-up to a gym, then Gorilla Workout is well worth a look. The app is all about developing strength and fitness using your own bodyweight. You’re given three levels (beginner, intermediate and advanced) and a small number of exercises to complete each day over a two month period. It’s a pretty simple app, but it’s full of really good exercises and great for those who want to workout on a budget. Endomondo was one of the first iPhone fitness apps on the market and its GPS running map system has been copied by many other apps over the last couple of years. Endomondo pegs itself as an all-in-one fitness application, able to track running, hiking and skiing sessions. There’s audio feedback, encouraging you to push yourself, and you can even get your friends to record their own motivational messages. Endomondo also has a nice and clean UI and works well with music players. But perhaps the most compelling feature of Endomondo is it’s robust community of runners, hikers and all-round fitness enthusiasts. It’s great to have a community that encourages users to upload running times for everyone to compete against. It’s also free, which is always nice. If your fitness goal is to lose weight, then you don’t just need an exercise regimen, you also need a decent nutritional guide. Lose It is one of the best weight loss themed iPhone fitness apps around. It gives you detailed nutritional information on a whole range of foodstuffs, from burgers to coffee, detailing the calories, fat content, protein, carbs and fibre. The app also provides a very handy calorie tracker, which updates you on how much energy you have burnt via exercise and how much you’re taking on by stuffing your face! GAIN Fitness is a great iPhone fitness app  if you’re a bit more experienced and require a workout tool that’s built with customisation and flexibility in mind. GAIN lets you create a variety of workouts based on your age and gender, as well as how long you want the workout to last, whether you want to build strength or cardio fitness, and what exercise equipment is available. The app itself is free, but you can buy a variety of workouts, such as Yoga regimes, bicep building workouts and chest workouts.

Did we miss your favourite iPhone fitness app? Tell us what makes it so great in the comments below.

Looking to develop your own application? Get in touch for mobile application development.