Whilst many may think that due to the share issues that the Western world’s biggest social network experienced this year, they would be wrong to imagine that Facebook is on the way out. Not only is Facebook growing rapidly across in countries such as South America and India, with a 47% growth rate this year and 1.5 new users signing up every 1.6 minutes, but the social team are working harder on customer service in the wake of the bad press they have seen recently. Add to this their undercover work on mobile and search and you can’t help but think that Mr Zuckerberg has plenty up his sleeve to ensure continued success. Facebook has recently announced, alongside Zynga, that there will be further cutting of ties between the two companies and this would suggest that Facebook has gaming plans of its own, although that’s pure speculation of course. Of course, Zynga has its own platform but the ability to share progress on Facebook will no longer be available. 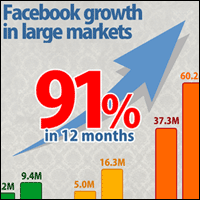 Mobile of course will continue to drive Facebook’s main ambitions, the company says that they “anticipate that the rate of growth in mobile usage will exceed the growth in usage through personal computers for the foreseeable future.” It seems that whilst mobile usage continues to soar, social media is moving to mobile far faster than any other medium. Facebook’s acquisition of Instagram has meant that the image app already has far more mobile users than Twitter; however, mobile is a notoriously difficult platform to advertise on, so how Facebook will overcome this, can only be speculated about. However, that’s not to say it’s not doable; you may have noticed recently that advertisements on Facebook often appear in your newsfeed as a friend has ‘liked’ a page and then of course there is sponsored stories, which look nothing like traditional ads, making for a more integrated advertising application for mobile.

This year’s obsession with big data is set to become even more so as social gives enterprises more access to mass amounts of information on clients, buying trends and demographics. However, there are only a few computer scientists who are capable (by a few I mean a few 100) of disseminating all of this information. According to Oracle, “93 percent of North American executives surveyed by Oracle believe they’re losing revenue by not leveraging available data.” “We need to build robust systems for analysing (sic) the huge amounts of data flowing in from social media and how they then link to all the other touch points consumers have with the brand,” explains digital analyst Marita Scarfi. However, in 2013, it’s very likely that we’ll see a new set of software and tools to help companies achieve this as companies such as Dell develop social media command centres to track data.

Whilst social media becomes more relevant to society, a recent study found that many companies aren’t using it that effectively. This has led to suggestions that more education is needed when it comes to using social. According to a recent Harvard Business survey, next year we can expect to see the emergence of social media in the classroom. This is already happening in some universities across the USA and is something we can expect to see take off worldwide. Likewise, companies will have to begin to invest in their employees if they want to ensure that they can maintain social monitoring and get the most out of social for their organisation. There are already ‘social intranets’ popping up in companies, as it’s been proven that it makes workers happier as they find it easier to collaborate and get to know one another, whatever department they work in. To sum up, social is going nowhere except in an upwards direction and companies are getting smarter to the power it offers. So expect to see better pages, tweets and targeted campaigns in 2013, with an emphasis on mobile.