Hello, and welcome to Trumpton! All I can say is thank goodness the fire brigade is accounted for. 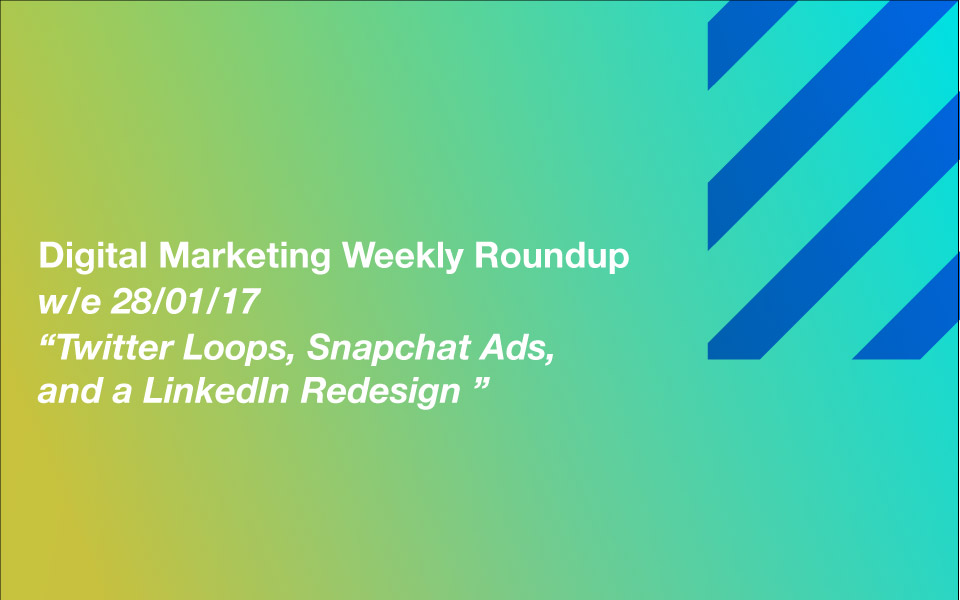 But, the clock, the Trumpton clock, has been telling the time, steadily, sensibly – never too quickly, never too slowly – over this inaugural week as reliably as ever. And across this carefully marked time has emerged plenty of social media updates that will serve nicely as welcome distractions from the smoke and flames bellowing all around.

The app officially closed down on January 17th, though has since been reincarnated as Vine Camera – essentially a new feature on Twitter.

But, for all of us feeling nostalgic about automatically looping 6.5 second videos, there’s good news! For Twitter now indeed automatically loops all videos shorter than 6.5 seconds, no matter if they come from Vine Camera, or other apps such as Snapchat, or just uploaded to Twitter the old fashioned way.

And it’s good that there is still a space for such videos – a point well made by Josh Constine at TechCrunch in an article last week:

“Even without Vine, Twitter still has a chance to be a hub for quick videos. The platform’s real-time nature and largely unsorted feed make it a natural place for clips you wouldn’t necessarily want to navigate to a full YouTube page to watch (with possible pre-rolls ads) and that might not survive well on Facebook’s algorithmically curated News Feed.”

Yeah – I agree with that. It is a shame that Vine had to go, but, as beggars can’t be choosers (apparently), at least Twitter is stepping up to the plate to fill the void it created.

The short, 6.5 second video loop has its place in marketing. The brevity – and indeed the automatic loop – provides the perfect format for cheeky little posts that are as humorous as they are promotional. Such videos allow brands to display a little personality and sense of humour – which, for B2C companies especially, can be extremely useful for building engaged audiences. A good Vine always stood the chance of going viral – and so thank goodness this opportunity hasn’t been stripped away forever.

Ah, who am I kidding? I’m just glad there’s still room for all that comedy gold! I mean, imagine how bleak the world would be without the Vine legends posting stuff like this. Seriously… “Liam Neeson’s knees on his niece on Es on a Nissan.” Genius.

Adweek takes the credit for this scoop.

Snapchat wants advertisers to start using “sequenced messaging”, which essentially means that their adverts can be split into parts and run-on consecutively, telling a story with separate chapters, if you like.

Storytelling, of course, is paramount to all successful marketing. Indeed, that’s essentially what we’re employed to do – tell the story of our brands. And this little update encourages marketers to think along those lines a little more decisively.

As a spokesperson for Snapchat told Adweek reporter Lauren Johnson:

“Think about taking a 30-second asset and getting it cropped up into three 10-second spots. I’m going to buy three back-to-back ads, and I’m going to tell this sequential story. I think it becomes unique in regard to storytelling. These guys are trying to get away with this idea of, ‘Maybe if you watched three seconds of the first video, five seconds (of the second video) and then 10 seconds to finish the story, that’s good, as long as you get the point of the narrative.’”

It’s certainly a unique way of doing things. Video ads – be they on social media of any kind or even the good old-fashioned telly – have always gone for the one-hit approach, and it will be interesting to see how advertisers (such as your good selves) go about this “sequenced messaging”.

“What’s interesting here is that this becomes part of the DNA of a buy. You’re starting to think through a linear story or a progression that can be told in a couple of steps, which is quite a bit different than your typical execution that you’d see elsewhere in social.”

It certainly is – looking forward to seeing what’s produced.

Yes, LinkedIn has announced that the platform is having a makeover – and about time too. It’s putting “conversations and content” centre stage, apparently – a move that will allow users to “more easily share ideas, join a discussion and discover news and topics [they] care about”.

From the LinkedIn blog:

“Today, we are excited to share our new look! This complete overhaul of our technology architecture is the largest desktop redesign since LinkedIn’s inception. Something we’ve taken the time and investment to build from the ground up and in concert with our new mobile app, to provide a LinkedIn experience that is more intuitive, faster and creates more value for you. Our goal is to ensure you can seamlessly access the most relevant professional conversations, content and opportunities whether you’re on our mobile app or on our desktop experience.”

New features for the layout include:

Not too shabby, I think you will agree.

And here’s the video so you can see for yourself what we’ve got to look forward to:

Looks neat, hey? I’ve just hitched a ride over to LinkedIn to check it out – but, alas, the update hasn’t reached my profile yet. However, LinkedIn confirms that it will be rolling out the redesign “to all members globally over the coming weeks.”

Cool – should be good for making some new connections. Hope to see you there!

That’s it for now. Have a great weekend!