Those of us addicted to Twitter will be more than familiar with the numerous parody accounts that litter the site – some hilarious; some not. Twitter’s tongue in cheek celeb copy accounts often provide all sorts of hilarious insights into the worlds of fictional Lord Voldemort, very real Bill Clinton and deceased William Shakespeare.

Of course, the notoriety that a normal serf can get on Twitter by posing as a member of the elite results in many of these accounts popping up each day. They say nothing succeeds like success, sadly that doesn’t mean all the Twitter parody accounts are successful. Some are poor, some are not funny and some are downright terrible. 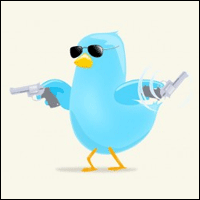 The most recent account to gather scorn was one registered as @GowanusDolphin, which parodied a dolphin trapped in the Gowanus Canal in New York. The account holder – evidently not a dolphin, received a lot of hostility across Twitter and eventually its owner apologised and took it down. So, to ensure you avoid the same fate, read our guide to creating a Twitter parody account.

The pivotal element in the success of a Twitter parody account is humour and if you’re not funny then you will fail. The problem with humour is that it’s subjective and also – hard. Unless you’ve natural talent in the funny area, then you’re most likely doomed to failure. Sadly not all humour translates to paper, meaning there are even greater limitations.

The biggest problem for parody accounts is that they are quite two dimensional, relying on a cardboard deep perception of the character at hand. This limits the amount and essentially the depth of humour that can be created and means the accounts become tired and formulaic quite quickly. Check out @Queen_UK to read her gin inspired toffish, upper-class ramblings to get an idea.

The UK public will stand for almost anything but animal abuse and numerous accounts and also huge TV advert campaigns have failed because advertisers fail to recognise this fact. Everyone from Pokemon to American shoe maker Skechers have been lambasted because of animal cruelty, thanks to a lack of consideration in their adverts. Don’t be the one to set up a Twitter account about a dolphin trapped in a river – very few will find it funny and they’re probably not the people you want following you on Twitter.

Anybody who sets up a Twitter parody account about a news event that’s just happened is most likely going to be lauded as an obscenity. Twitter account @JaredbKeller probably explains it best here and he should know he is the Bloomberg social media director.

A Parody in Itself

If you create a parody account for fame, to promote something or to make money then you should be disgusted with yourself. Parody accounts should be for the sake of humour itself and anyone with an ulterior motive. Take for example @MrsStephenFry or @MrsPontifex, parodies of Stephen Fry (obv) and The Pope and both in existence for the sake of book deals.

Twitter parody accounts can be well done on occasion; however involve a lot of time, effort and talent. So, be sure you have the resources at hand before setting one up.