Using storytelling to present your brand What’s your brand’s story? That may not be a question you’ve thought to ask yourself before. What sort of story can car insurance (for example) possibly tell? But finding and telling that story is essential these days to connect people to your brand. You need to take people on a journey, linking your brand to their experiences and making positive emotional connections. 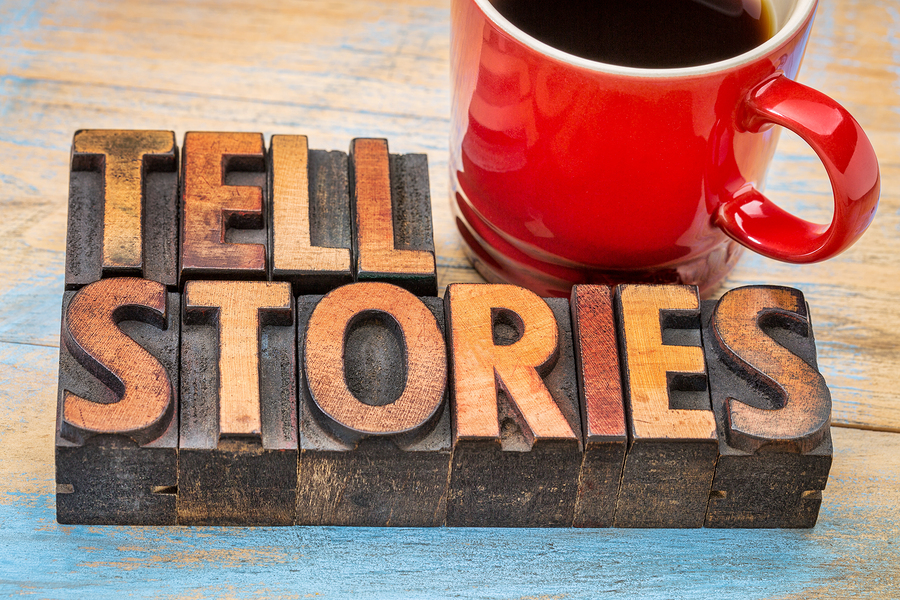 That probably sounds quite difficult, but it really needn’t be.

So how do you identify your story? You need to identify the positives of what you do. In our fictional car insurance example, think about the time your customer got his or her first car – and you insured them. Your company helped that person get on the road. That’s a story everyone (well, everyone who drives) can relate to and can easily be told either through video or even just a picture and a few words – someone holding a set of car keys and a title such as ‘Insurance (company name) got me started on my journey’.

Your business, whatever it is, is full of suitable stories like this. You just have to look for them. The important thing is to keep your story personal, to show you care about and relate to your customers, while also inspiring action.

The above example is a testimonial, using customer loyalty to tell your story. Casting the audience as the hero is more and more common in brand presentation and more and more successful – something as simple as ‘Just Do It’ tells a story in itself in just those three words, about how determination can make change, and casts the reader as the central character.

But you don’t have to cast the audience as the central character, as long as you do something that resonates with a problem they may have that only your brand can solve. Can deodorant really make you more desirable to the opposite sex? No, but it’s a problem we’ve all had (right?) and this story has been so successful (at least among its target male audience) that I bet I don’t even have to name the brand it advertised. You know it, and you know it because you’ve a connection to the story you were told.

OK, so you’ve created your story. Does it make your audience:

– Feel emotional (ideally not in a negative way, although charities (for example) regularly tell sad stories to make their audiences feel invested)
– Hold their interest
– Make them take action

If it doesn’t do these things, think again. Make sure your story is clear, and that it properly explains the action you want them to take.

But creating your story is just one part of the overall equation, you also have to get it out there. You need to identify your medium.

Social media is likely to be crucial. If you’ve got one great image that tells your story at a glance, then it’s perfect for Pinterest. It may well be perfect for Facebook too, but be wary, people can resent ads in their Facebook feed, and it’s not uncommon to see some scathing criticism make up the bulk of the comments beneath an advert.

Another useful site is Storify, which allows you to take any posts from your range of social media feeds and combine them into a timeline – with additional comments from yourself – to tell a story. So if you’ve had a lot of positive comments about your product or service, it’s very easy to take these testimonials and produce an eye-catching Storify with them, which can then, of course, circulate around social media again. The story you’re telling may be a simple one, but when told by members of the public themselves directly – which is what you’re creating here – it can be brilliantly effective.

You might also want to consider turning your story, if suitable, into an infographic. Image-based stories are invaluable as all of the information can be taken in visually and quickly. The web is not ideal for long textual pieces for marketing, while an infographic gets the story/message across swiftly and succinctly.

Of course there are other media; perhaps you’re going for TV or radio, but if you haven’t the budget for that then a YouTube video may well pay dividends. Don’t automatically assume your video will go viral (as nice as that would be, for every single video that does, thousands don’t), but if done properly, it will give your brand a welcome boost.

And if you are going for a video, make sure the story is simple, clear and contains a call to action to request people to do something. And that, at some point, it’s branded sufficiently; usually this doesn’t happen until towards the end of the vid to prevent people going ‘oh, it’s just an ad’ and turning off.

However, saying that, do use company colours, logos and a consistent, preferably friendly, voice.

It’s difficult to use storytelling to present your brand. Just remember to keep the audience engaged by their emotions, and you’re almost there. But if you’re still not sure, this selection of fantastic stories by brands should really help inspire.