Viral video production is going strong and March saw a healthy crop of thought-provoking, emotive and funny videos. Here’s a look at 10 of the most popular from the last month. 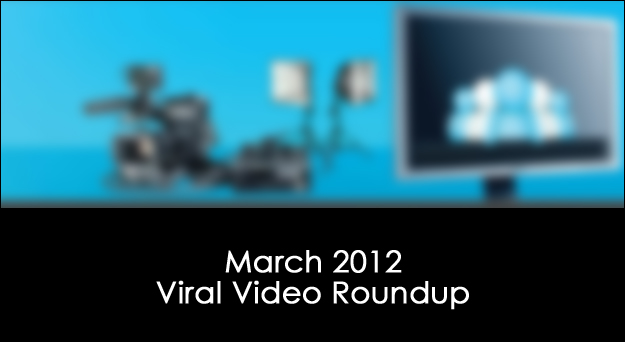 Invisible Children’s campaign video was an unprecedented viral video production sensation. There’s a sequel expected this week – will it be enough to bolster the campaign back up to March’s dizzy heights?

Britain’s Got Talent producers went for the Susan Boyle/Ugly Duckling formula. They painted Jonathan as an underdog who was bullied at school, who then went on to wow the audience and judges with a celestial operatic voice. The story worked and has resonated with people all over the world.

When it comes to viral web videos, I think most of us have realised that you can’t go wrong with toddlers, babies, and cats. Toddler Dances the Jive was another popular one in March.

4. Darth Vader in a Kilt on a Unicycle Playing Bagpipes.

Sometimes all that’s needed to make a video go viral is a healthy dose of randomness and surreal humour. Brian Kidd, or “The Unipiper” also brings a robust measure of talent and skill to his videos – he’s a fan of doing two very hard things at the same time.

Now for a corporate video – Mercedes attached LED panels to one side of a car and mounted a video camera on the other. Whatever the camera shot was projected via the panels, creating the illusion of invisibility. The idea is to show that the new fuel cell vehicle’s environmental impact is nearly invisible.

Astronaut Don Petit announced the new game, Angry Birds Space, from the International Space Station, which is around 280 miles above the earth’s surface.

7. Will the Real Mitt Romney Please Stand Up?

US Presidential hopeful Mitt Romney gets down with the kids in his version of the Eminem classic.

This video uses a perennial staple of viral videos online, that is cats, with the added bonus of a chick falling asleep on said cat. The video isn’t that long but we can only hope that the chick ultimately survived.

After the success of the original Keyboard Cat, and of course, Nora the Piano Cat, it was only a matter of time before a dog emerged as YouTube keyboard superstar. As an added feature, the dog also sings.

Bringing controversy to the world of corporate web video production, Red Bull’s Jesus video featured a cartoon of the man himself walking on water – but he reveals that you don’t even need Red Bull to walk on water – you just need to find the right rocks to step on. The ad was banned in South Africa and Red Bull has removed it from YouTube.

Which of these videos is your favourite? Tell us in the comments below.