By now, most of us know what the term ‘going viral’ means. In short, it’s the name used to describe a piece of content, whether it be a blog, web video or image, which is shared so much in a short space of time that it bleeds into everyday life. 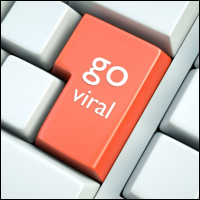 By this, I mean that you may hear a workmate make a reference to it, or perhaps see a news piece on the TV about it. That’s true viral content.

A lot has been written about what type of content goes viral. Often, it’s useful and gives value to the sharer and those they share it with. This could be in the form of money-off coupons or special offers, but more often than not, it’s funny posts that really get us going.

Recent research from Jonah Berger and Katherine L. MilkMan, in the Journal of Marketing Research, goes beyond what content goes viral and looks instead at why it does. For the purposes of the study, the authors looked at three months’ worth of New York Times’ articles to see how emotional responses shape virility.

Let’s look at some recent viral content to see how it fits within this model.

This week a number of Tesco, Aldi, Lidl and Dunne stores across the UK and Ireland were found to be selling burgers which contained horse DNA. Of course, the initial reaction from the public in both countries was complete disgust.

This triggered a number of responses on social networks but the swiftest growing and most shared was soon seen to be a prank pulled in a Tesco store and filmed on a mobile phone.

‘RHOJO the horse’ is taken to his local Tesco store to look for his family in the video shown below. This spread like wildfire across Facebook and hit all of the online news channels (except mainstream) the following day.

So why did it go viral? Well, the news that our burgers contain horse meat spread rapidly over the social networks immediately after it was reported. This gathered mixed reactions, some people made jokes, some expressed disgust and swore never to look at a barbecue again, whilst the enterprising maker of the video decided to do something with the news.

All-in-all, the main story had already elicited an emotional response from all those who read the news, whether it was amusement (positive) or disgust/anger (negative). Of course, many people experienced a mixture of both emotions.

Both of these emotion sets, if the research is to be believed, are enough to prompt virility on their own, let alone when put together, which is more than likely why the mainstream story featured so heavily on social networks in the first place.

However, the interesting thing about the resulting video is that it took the negative emotions and turned them on their head, causing amusement in the majority of people, who quickly shared it. This enabled people to have a positive experience of the original story, rather than just a negative response.

The researchers named above found that there were several emotional responses which prompted content to go viral:

Looking again then at the video, we can see that anger and anxiety placed a large part in making the original story spread across the web. However, positivity is placed as the biggest prompt to virility and as such, we can determine from this that by making a positive from negative (and already relatively viral) emotions pertaining to the story, the author of the video had hit upon immediate success.

But why did this particular video go viral? Well, according to the research,

“content is more likely to become viral the more positive it is”.

Whilst studying the NYT articles, the researchers found that content that contained both positive and negative aspects tended to be positively associated with the most emailed list (for expressing interest).

Apply it then to the above example and this argument wins out. Taking potentially negative content and turning it into a positive meant that the author of the video was onto a winner as soon as he picked up a horse costume and mobile phone.

As for Tesco? You know what they say, any advertising is good advertising and I doubt that this will harm their reputation at all in the long term.

Need help with your content and delivery? Hire us for social media optimisation.